Freedom of Speech and the Movies: Joseph Burstyn, Inc. v. Wilson, from Skiffleboom.com 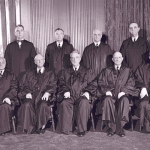 In 1952, the Supreme Court ruled against the Commissioner of Education of New York’s censorship of a “sacrilegious,” deeming the censorship as a first amendment violation. New York movie distributor Joseph Burstyn attempted to release a controversial Italian film labeled as “anti-catholic.” While critically praised, the Italian short film “The Miracle” was met with animosity from a morally guarded public. There were several protests worldwide, which condemned the film as blasphemy. Under pressure from a vocal public, the New York State Board of Regents, acting through the Commissioner of Education, revoked the film’s license under the pretense of “sacrilege.”

Written by and starring Federico Fellini, "The Miracle" was at the center of the landmark Supreme Court decision that changed the role of censorship in American film.

Burstyn appealed the Commissioner’s actions to the New York, and ultimately, the Supreme Court. He argued that the decision was in violation of the First Amendment. Film, Burstyn’s lawyers argued, is an artistic medium, not just a business, whose expression is protected by the Constitution. Labeling the film as “sacrilegious” was irrelevant in this context — if film is expression that does not infringe on the constitutional rights of others, than its content is guaranteed protection. Under the same amendment, the New York State government’s decision to censor for religious content further violates the separation of church and state. The term sacrilege is vague and could be used as an umbrella term for further free speech restriction.

The Supreme Court’s decision helped define what film meant to 20th century American culture. Film was recognized as an artistic medium and given the same rights as any other form of expression. The decision was a landmark case, weakening censorship and expanding the subject matter of films:

“Though the Constitution does not require absolute freedom to exhibit every motion picture of every kind at all times and all places, there is no justification in this case for making an exception to the basic principles of freedom of expression previously announced by this Court with respect to other forms of expression.”

Despite the public outcry for moral decency, the nine Justices of the Vinson Court unanimously sided with Burstyn, reversing the judgment of the New York Court of Appeals. 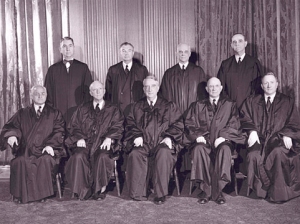 This decision helped to usher in a new area of filmic exploration (as well exploitation). With the United States government supporting the idea that film is expression, more and more filmmakers began exploring taboo subject matters. Within two decades, American film had overcome many of the moral censorships imposed in the 1930’s, and was free to explore themes and ideas with the pubic. As times and attitudes have changed over the generations, film remains a relative constant — a window into bygone eras of morality.

Censorship imposed prior to this decision forced creative solutions to thematically limited material. For instance, when dealing with themes like non-marital intercourse, homosexuality, politics, race, or religion, filmmakers had to circumvent directness with metaphor, innuendo, and symbolism. These restrictions forced artists to explore alternative methods to incorporate taboo themes, furthering cinematic language.

However, censorship ultimately inhibits the artist from expressing ideas they deem truthful. By inhibiting expression, the government does a great disservice to the public’s natural liberties. The public’s relative morality is not as important as the public’s ability to share ideas, including the ability to discuss what constitutes morality.

The Ad and the Ego, from Skiffleboom.com

1. What do the filmmakers mean when they say advertising is “a form of education,” and “ a tool of socialization?” 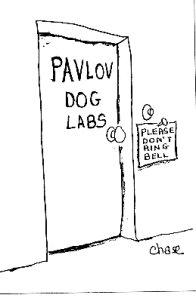 Advertising in American society is ubiquitous, pervading any and all available spaces. Through sheer presence, advertising has cultural and social impact. Americans are inundated with ads, starting from youth. It can be argued that more young Americans spend time with media and advertising than with traditional education. In this way, advertisers have great influence on how American’s view their world and themselves. Advertising is so pervasive and influential that it creates social associations with products. A collective group may adopt a product due to a perceived association with their lifestyle; an association developed through advertising.

2. What do they mean when they say “Advertising is the Dream Life of a Culture?” Relate this to Pavlov’s association experiment.
Advertising injects values into item’s whose utility is not great enough to effectively sell the product. Advertising suggests our beliefs in the supernatural and the technological will help us achieve these values when melded. These values reflect the dreams, desires and emotions of the individual, which are powerful and potent tools for product association. Advertising creates emotional associations when meaning is infused to products, often through imagery and symbolism. These associations recall the “need” for the product when the individual feels that they feel inadequate or inferior. Advertising is often the same mechanism that creates these feelings of inadequacy or inferiority. This association is similar to Pavlov’s psychology experiment with salivating dogs and stimuli. Emotion and desire become stimuli that prompt the consumer to “salivate” for associated product.

3. According to the film, what are the ecological consequences of advertising and the consumer culture?
The health of a consumer economy directly correlates to the consumption of resources. Advertising does not concern itself with where a product comes from or where a product goes to after consumed. This invisibility divorces the consumer from environmental responsibility. Consumption is made to look beautiful and desirable – while the effects of consumption are not part of the conversation. Unsustainable production and consumption result – resources are used up and the environment is polluted with byproduct. Consumption nations, which comprise only a small percentage of the global population, are largely indifferent or unaware of the effects of their consumption on resource nations. In order to sustain consumption, dominance is exerted over third world resource nations. This dominance is often violent, but the objectification and indifference to third world populations and environments allow consumer nation’s to perpetuate the cycle.

An Analysis of Reebok’s “Terry Tate Office Linebacker,” from Skiffleboom.com

*Please note the original commercial video has been taken down.  This longer, alternate version contains the same elements.*

Product recognition
There is no specific product mentioned during this ad. The real product recognition is the Reebok brand name. In this regard, the ad does not telegraph the Reebok logo, but infuses it subtly, allowing the humor to take center stage. The ad entertains, attracting attention. At the end of the sixty-second spot, the ad prompts the viewer to visit Reebok’s website. The ad reveals the website as a product – having enjoyed the sampling, audience members can watch more Terry Tate online. This “product” encourages participation; cleverly netting several million viewers into visiting what is essentially Reebok’s interactive catalogue.

Differentiation
There is no specific mention of comparable products during the commercial, but the phrases “Paradigm breaking,“ “outside the box thinking,” “increase in productivity” are used. There is a notable difference between the intensity of Terry Tate’s “extreme work ethic” with that of his co-workers. As Tate is a symbolic representative of Reebok in the commercial, one can infer the Reebok brand is more intense than the competition.

Association
The ad associates an extremely aggressive work ethic with the Reebok brand name. The ad also associates high intensity and increased performance with the juxtaposition of football and office environment. The Reebok brand is seen as having powerful, no-nonsense effects on the mundane. The ad suggests Reebok apparel will turn an ordinary office into an efficient, thrilling machine.

Participation
The ad assumes a certain amount of Reebok brand familiarity. The logo and mention of the Reebok brand is not apparent, nor is any specific product mentioned. The true participation happens at the end of the commercial. The logo and copy “Watch more Terry Tate Office Linebacker Reebok reebok.com” appear, enticing any viewer who enjoyed the commercial to view more at the company’s website. According to USA Today, the website had over 7 million hits from the initial airing.

Redundancy
The Reebok logo is subtly featured in several shots of the commercial. It is featured in narrative cutaways both on a mug and on a plaque. The Reebok logo is featured on Terry Tate’s jersey. The end of the commercial features the logo prominently displayed on the screen, along with the Reebok website. The word Reebok is spoken only twice during the sixty-second spot. This memorable and popular ad originally aired during the 2003 Super Bowl. The campaign was aired repeatedly, featuring the same character, for several years. The ad was notable for prompting over 7 million “webisode” downloads from Reebok’s website after only one Super Bowl airing.