A Scene from “Casablanca” – Rick Helps the Bulgarian Couple, from Michael McVey, Skiffleboom.com

Watch Casablanca. Chose a scene and identify what the hero wants. Choose one scene from the movie and describe what it is about by using Mamet’s method of analysis in one short paragraph. (What does the hero do in this scene to try and get what he wants?)

About an hour into Casablanca, Rick helps a young Bulgarian couple desperate to reach America. Rick’s objective in the scene is to quietly facilitate the young couple. He needs to keep his help secret, to maintain his reputation. Rick does not want to see the newly wed Bulgarian girl forced to trade sexual favors for an exit visa. Rick sympathizes with the couple’s predicament – he does not want them to experience the pain of a compromised relationship. There are a few steps Rick takes to accomplish his objective. 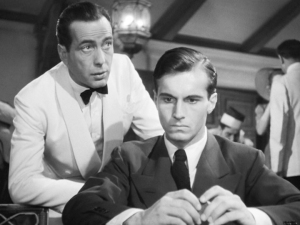 Rick needs to secretly secure money for the couple’s exit visas. Rick enters the room and makes contact with the roulette dealer – a dealer who works for Rick. Rick straddles up to the young Bulgarian man. He advises the man to bet on 22. Rick needs to communicate with the dealer to fix the game. Rick repeats himself so that the dealer hears. The dealer correctly interprets Rick’s tone and look: roll a 22. The dealer rolls 22, and the man collects. Again, Rick advises the man to bet on 22. The dealer understands Rick’s unspoken orders. The man bets and wins. Rick succeeds in getting the Bulgarian couple enough money to exit Casablanca.

Rick’s second objective is to keep the whole affair quiet. Rick tells the man to cash out his chips and leave permanently. The man complies. Rick asks the dealer how they are doing? The dealer replies that they are down a couple thousand, and he winks knowingly. Since the other witnesses and participants work for Rick, the transaction remains secret. The Bulgarian woman approaches Rick and hugs him gratefully. This jeopardizes Rick’s objective of keeping his sentimental actions quiet. Rick coolly ends the hug and tells the woman her husband is “just a lucky guy.” He downplays the potentially emotional scene, keeping the whole affair quiet. Reputation intact, Rick succeeds in both helping the couple and maintaining secrecy. This scene is very efficient in handling Rick’s objectives. His goals are clear without being obvious. Rick’s true character is revealed, and the scene becomes more emotional by having characters conceal their emotions.