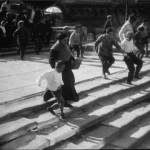 Pick a short sequence of about 10 shots from Battleship Potemkin or Man With a Movie Camera and discuss in detail how it illustrates what the “camera eye” together with editing show that no other medium or human perception can see.

During “The Odessa Steps” sequence of Sergei Eisenstein’s Battleship Potemkin, a civilian crowd runs down the staircase from Cossack gunfire.   Among them, a small boy runs down the staircase with his mother.  Cossacks shoot from the steps above.  In the panic, the boy is shot.  He falls.  His mother continues in the chaos.  Bleeding, he calls out to her.  The mother realizes her boy is gone.  She stops and turns into the crowd.  She sees her boy.  He reaches out his hand, then collapses.  The mother stands against the oncoming mob, her face aghast.   The mob kicks and tramples the boy’s lifeless body.

This short sequence opens with a tracking shot.  We dolly alongside the mother and boy as they race down the stairs.  The shot begins nearly static – trimmed right to the moment the camera begins to move.  This camera movement stirs fervor.  The camera descends to the bottom right, keeping mother and son centered amidst the crowd.  It is as though we are running alongside them.  This is a very dynamic shot with strong vectors.

The vectors transition smoothly as the shot cuts to the blazing Cossack guns.  The gun barrels fire to the bottom right; they serve as index vectors.  The spatial geography is clear with these two cuts.  The Cossack faces are obscured.  This static low angle shot is anonymous and menacing.  We draw a direct connection between the gunshots and the fleeing mother and son.

Matching vectors, we cut to a static medium shot of the running son and mother.  The boy collapses on the stairs, splayed out center frame.  His mother continues running, unaware her boy has fallen.  Since the cut is juxtaposed against the gunfire, we know immediately he is shot in the back.  The image is impactful within the film’s context:  an innocent boy falls victim to brutal political violence.

A new cut maintains the descending vectors.  We return to our original tracking shot: the camera dollies alongside the mother running down the crowded stairs.  The rushing camera dolly gives us a sense of urgency.  The panic overwhelms her awareness.  She doesn’t realize her son is gone.

We quickly cut to a static close-up of the boy.  Blood streams down his face.  Blinded, he screams for his mother.  This is the first shot of the sequence not adhering to the right-descending vectors.  This gives this insert a jarring feel, as we cut back to the original tracking shot.

The camera dollies alongside the mother running, descending vector.  She realizes her son is gone.  She slows to a halt, as does the camera movement.  The crowd descends around her.  She turns around.  We cut on the turn.  This creates a natural in/out point for the next shot.

We cut to close-up of the mustachioed mother.   Harbor behind her, she turns and faces camera.  She looks away from escape back towards violence.  The mother’s face widens horrified.  She sees her son!

We cut back to the static close-up of the bloody boy.  He reaches out for his mother, screaming.  He collapses, dead!

We quickly cut to a close-up of the mother horrified.  She raises her hands to her head!  This reaction shot emphasizes the impact of the boy’s death.  The cut happens quickly, but the mother’s shock amplifies the blow.

We cut to an extreme close-up of mother.  Her eyes widen.  She is helpless, mortified.  She calls out to her son.  This shot fuses his death with parental empathy.  Each close-up is larger and more affecting.

We cut to a wide shot of stampeding crowd.  The camera crosses the 180-degree line and flips vectors.  We are jarred, uncomfortable.  The hysterical crowd pours down the steps.  People shove brutally, more people are shot and fall beneath stampeding feet.  This cut-away emphasizes chaos surrounding the dead boy.

We cut to static close-ups of the boy’s lifeless torso.  Feet step over.  We cut to a second close-up of the bloodied body.  A man’s foot steps directly on the hand.  The hand moves reflexively!  Is the boy still alive?  By suggesting the boy may still be alive, these quick inserts make the scene more appalling.  The terrified mob tramples his limp body.

We cut back to the mother’s horrified face.  This extreme close-up delivers horrendous shock and empathy.  We are given a full-frame of facial expression.  Juxtaposed with the confusion of the mob and violent imagery, this close-up mirrors our own disgust at the events.  We empathize with the expressive mother against the faceless, violent hoard, and unknowingly succumb to some brilliant propaganda.

This sequence demonstrates film techniques that circumvent certain limitations of human perception (sans acid).  Within the context of the scene, we are able to change our point of view.  Instead of perceiving an event from one specific perspective, we jump around to multiple viewpoints.  We are not limited by the physicality of the camera itself.  Our “camera eye” can be placed in a raging mob without being stampeded. 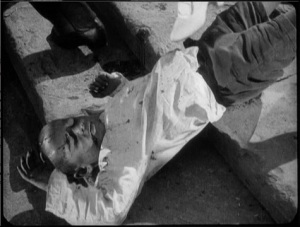 A film can observe details that are otherwise overlooked, or juxtapose to unrelated images or scenes to create new context.  A film can bolster or downplay emotions with close-ups.  Reaction shots effect and define how emotions are perceived.  Human perception is limited spatially – it is difficult to observe multiple individuals with only two eyes.  Film can manipulate time.  In addition to changing frame rates, editing can manipulate time in a way human perception does not.  As we cut back and forth between mother and son, are we watching simultaneous reactions broken into two parts?  Or are we seeing the characters in real time?

Film can strongly illustrate psychological drama and the inner workings of characters.  Film narrative can be reliable or unreliable, linear or fractured.  With spatial and temporal restrictions lifted, filmmaking gives people new ways to tell stories as well as share experiences, emotions, and observations.

“Place two characters in a scene of direct conflict. … Use dialogue as needed, and resolve the scene. Minimum length: 2-3 pages” (Hall, 12). All scripts are written in the present tense. Write what you can only see and hear. Post your assignment using EasyEdit (copy and paste from Word, but keep a back-up of your file).