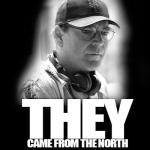 For episode #22 of THEY CAME FROM THE NORTH (Podcast #1189 on DVD Verdict) the crew invited me as a special guest, and we had a grand time looking back on Hyams’ oeuvre.  You can download the podcast here, but BEWARE!—this 2 hour discussion is for movie geeks only:

You can play along at home with IMDB and Youtube pages open, looking up the facts and clips as we go.  Here is the trailer from the 1983 sci-fi classic “OUTLAND”—watch heads violently explode in the wake of Sean Connery’s machismo: