Explosions in the Sky – Your Hand in Mine. San Francisco, 1906 [Skiffleboom.com]

I thought this up one early April evening, after playing with the magnets for hours.  I enlisted HARDCORE AWESOME PHOTOGRAPHER Seth Wood to shoot the magnet animation, using a trusty Canon 5D Mark II.   We used individual photographs shot over three separate nights — over 2,880 photos in total. I edited in Final Cut Pro at 24 frames per second.

We wanted to keep the lighting consistent during the shoot, to get the smoothest motion.    Since my kitchen has many windows, a daytime kitchen takeover to set up cameras and lighting would have been too much effort.  It was easier for us to shoot at night, from 10PM to 4:30AM (followed by 3 hours sleep… and then our day jobs!).

A trip to see some Fleet Foxes with Mortimer Duckbrella + friends.  Orpheum Theatre, Boston MA – May 17, 2011, HD FLIP + FCP.  I stitched this video later that night.

The official Mykonos video is OUTSTANDING:

Such beautiful animation.
The door slammed loud and rose up a cloud of dust on us
Footsteps follow, down through the hollow sound, torn up.

Pallid animals in the snow-tipped pines I find
hatching from the seed of your orphaned mind, all night

You’ll go
Wherever you go today…

Torrid Love Affair with the Somerville Open Studios, from TheInfamousDance.com

Abbie Barrett and The Last Date: “Disappointing You” Music Video

Here is a brand spanking new music video we made for Abbie Barrett and The Last Date. Song is called “Disappointing You” off the album Dying Day, (available on iTunes).  www.AbbieBarrett.com

Bostonians will recognize Abbie Barrett and The Last Date from the Boston music scene.  Her sound has been described as “not bad” and “good” by several people that are not related to her.  Abbie’s blend of eclectic indie folk rock has inexplicably yielded her an Academy Award nomination for Best Special Effects in a Motion Picture for the movie “AVATAR.”  Abbie Barrett and The Last Date are: 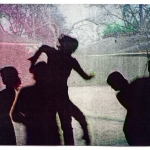