The Complete STANLEY KUBRICK Exhibit at LACMA – Skiffleboom.com » Stanley Kubrick at LACMA: The Killing and Fear and Desire/The Motifs of Noir 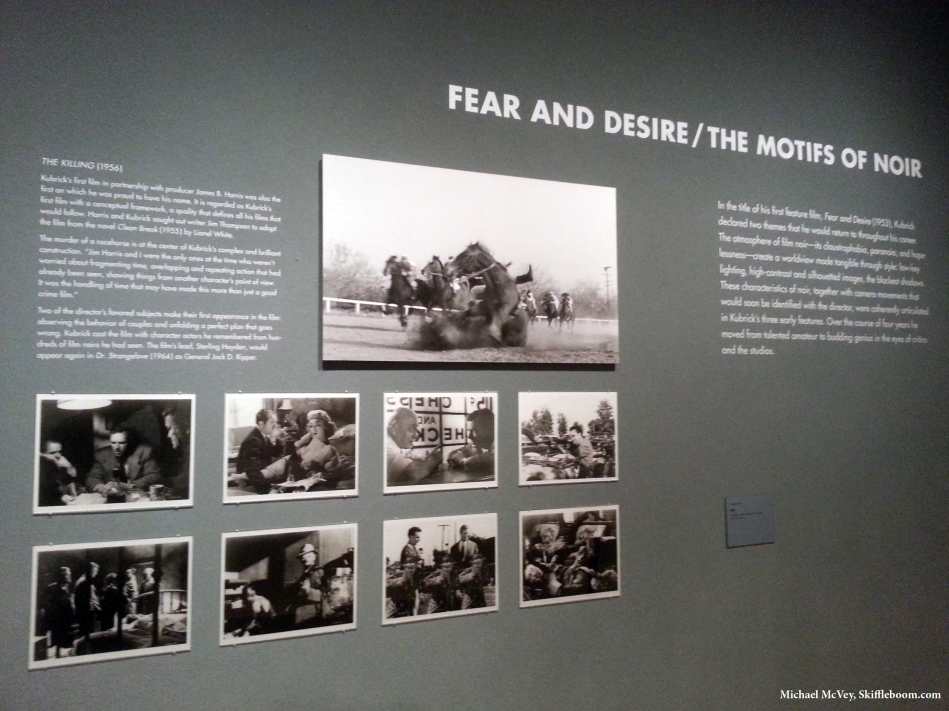 Kubrick’s first film in partnership with producer James B. Harris was also the first on which he was proud to have his name. It is regarded as Kubrick’s first film with a conceptual framework, a quality that defines all his films that would follow. Harris and Kubrick sought out writer Jim Thompson to adapt the film from the novel Clean Break (1955) by Lionel White.

The murder of a racehorse is at the center of Kubrick’s complex and brilliant construction. “Jim Harris and I were the only ones at the time who weren’t worried about fragmenting time, overlapping and repeating action that had already been seen, showing things from another character’s point of view. It was the handling of time that may have made this more than just a good crime film.”

Two of the director’s favored subjects make their first appearance in the film: observing the behavior of couples and unfolding a perfect plan that goes wrong. Kubrick cast the film with character actors he remembered from hundreds of film noirs he had seen. The film’s lead, Sterling Hayden, would appear again in Dr. Strangelover (1964) as General Jack D. Ripper.

In the title of his first feature film, “Fear and Desire” (1953), Kubrick declared two themes that he would return to throughout his career. The atmosphere of film noir— its claustrophobia, paranoia, and hopelessness— create a worldview made tangible through style: low key lighting, high-contrast and silhouetted images, the blackest shadows. These characteristics of noir, together with camera movements that would soon be identified with the director, were coherently articulated in Kubrick’s three early features. Over the course of four years he moved from talented amateur to budding genius in the eyes of critics and studios.