Watch The Seven Samurai. Choose one scene and list each shot in it.
Identify what kind of camera angle was used (such as a wide shot, medium shot, close-up), any camera movements (dolly, pan, zoom, tilt), and a description of the action occurring in the scene (the movement of the actors, and so forth).

The samurai bury Heihachi after he dies during a raid. The farmers and samurai mourn his loss. The wild Kikuchiyo galvanizes the village with Heihachi’s flag. At that moment, bandits attack that village.

Low-angle, Long shot of the hillside. Encircled by villagers, the samurai bow before Heihachi’s grave mound. The wind blows.

Low-angle, Medium long shot of samurai. This a zoomed shot at the same angle – the samurai perform the burial ritual.

Low-angle, Medium long shot of Kikuchiyo, framed left. This is an even closer view, same angle. The camera tracks Kikuchiyo as he plunges Heihachi’s sword into his grave, then sits, despondent.

Return to Low-angle, Long shot of the hillside. The samurai and farmers kneel before Heihachi’s grave mound. 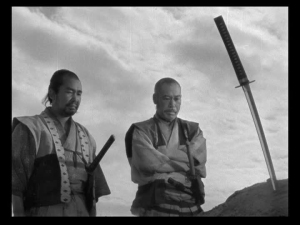 Medium, Low-angle shot of Kambei and Gorōbei, with Heihachi’s sword in the foreground. The two samurai speak of Heihachi and the hard times to come.

Medium, Low-angle shot of Rikichi and the farmers kneeling at the grave. As the farmers mourn, Rikichi breaks down and hugs the dirt, crying in despair. His actions accidently lead to Heihachi’s death. The camera pans left, following Rikichi as he snaps.

Return to Low-angle, Medium long shot of Kikuchiyo, framed left. Kikuchiyo yells at Rikichi to stop crying. The camera tilts as he stands. 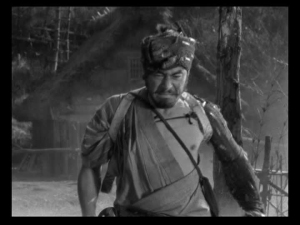 Long shot to Medium, tracking the movement of Kikuchiyo run through the village and into the samurai’s quarters. The camera pulls back as Kikuchiyo enters the building and pans left as he grabs Heihachi’s flag, then scrambles outside.

Wide shot with Samurai in the foreground, and Kikuchiyo on the roof in the distance. Kikuchiyo plants the flag in the thatched roof. The samurai see the flag and turn towards it.

Close-up on Heihachi’s flag. The flag stands tall, waving in the fierce wind.

Return to Low-angle, Long shot of the hillside. The farmers and samurai all turn to the flag.

Medium shot of farmers. The male farmers jockey for position, fixing eyes on the flag. 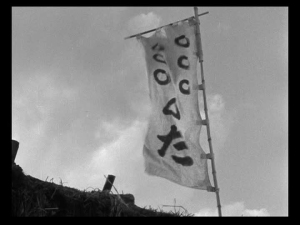 Return to Close-up on Heihachi’s flag. The flag waves.

Extreme close-up of flag. The camera tilts down on the flag’s symbols. 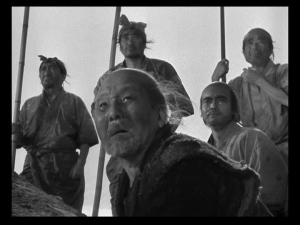 Medium close-up of farmers. Tears roll down the farmer’s cheeks. One farmer kneels in the foreground, the others stand in the background, mourning.

Return to Low-angle, Long shot of the hillside. The village stands together, staring at the flag.

Return to Extreme close-up of flag. Again, the camera tilts down on the flag’s symbols.

Medium shot of Kikuchiyo on the roof. Kikuchiyo sits, cradling himself under the flag. Something in the distance suddenly alarms him.

Wide shot of the distant hills. Bandits on horseback gallop over the horizon.

Return to Medium shot of Kikuchiyo on the roof. Kikuchiyo alertly stands and runs to the roof’s edge as the camera pans left, tracking him. He announces the bandit arrival to the village. “Goddamn! Here they come!”